In January 1493, Christopher Columbus and his crew were sailing near the Dominican Republic when the famous explorer announced he saw something peculiar in the water.

According to priest Bartolome de Las Casa, who had read Columbus’s ship logs: ‘On the previous day, when the Admiral had gone to the Rio del Oro, he said he saw three mermaids, that came very high up out of the sea; but they were not so beautiful as they are depicted’. He adds that they ‘had human form in their faces. He said that he had seen some on other occasion in Guinea, on the coast of Malagueta.’

Did Christopher Columbus really see mermaids? If not, what had he witnessed? HMS Unicorn is exploring all things mermaids and mythology in our new summer exhibition Mermaids: A Maritime Mystery. Working with Dr. Charles Paxton, Research Fellow at the University of St. Andrews, and the Scottish Fisheries Museum, we explore the history of mermaids, stretching back to Ancient Mesopotamia, where the first mermaid legend was reported circa 1000 BC. They even appear in Greek mythology, with Poseidon’s son Triton often depicted as a merman, and his name now used to describe a race of mer-people who live in Poseidon’s underwater palace. 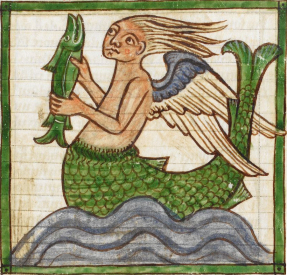 Of course, you don’t have to travel that far to find mermaids. On 9th June 1909, William Munro claimed to have spotted a mermaid in Thurso. He says he was ‘arrested by the appearance of a figure resembling an unclothed human female, sitting upon a rock extending into the sea.’ The figure was combing her hair and later ‘dropped into the sea, from whence it did not reappear’. Pop on down to HMS Unicorn to hear more stories about mysterious mermaids and decide for yourself whether they really do exist. Mermaids: A Maritime Mystery is displayed on board until Sunday 31st October 2021.